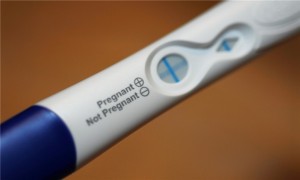 My life changed the day I pissed on that little stick we all know as a pregnancy test. I remember it like it was yesterday; Almost exactly a year ago, October 9, 2013. I had to work that day and my period was already three days late. For someone like me, who keeps track of her periods and is literally always on time I knew something was wrong but all I could do was deny deny deny. That was until something in the back of my mind said run to the store and that’s exactly what I did. Fifteen minutes  later I was looking at a plus sign. I was indeed pregnant and there was no way I could deny it. Five seconds after peeing on that stick the plus signed showed up clear as the sky on a hot summer day. So I sent it to my boyfriend at the time who replied, “Are you really?”

Now with that said I should have taken that as a sign. Of course I was really pregnant, I wouldn’t send a picture of a pregnancy test if I wasn’t. Some women play those games but not I. Plus when you’re having unprotected sex there’s only so much that can happen; a STD or a baby and we ended up with a baby. Or let’s be more clear, I ended up with a baby.

So many times women end up single mothers because they base what they do in life off of a guys broken promises. Am I wrong or am I right? He tells you he loves you and can’t live life without you. He wants you as his wife and to have your kids. Lets be honest this usually all happens at the beginning of the relationship, the honeymoon stage. The two of you haven’t even actually gotten to know each other. The sexual chemistry is there but nothing else. He’s whispering sweet nothings in your ear not realizing when he forgets about it, those words are still implanted in your head. The honeymoon stage ends and you end up breaking up or are on the verge of breaking up and you end up pregnant. Now this is when you have to throw everything he said out the windows and make a decision for YOURSELF. A lot of young women do not do that. They think maybe if I keep the baby he’ll change and we can be a family. I personally think that’s the worst decision a woman can make; having a baby because they think it’ll get them the man.

When I seen my positive pregnancy test EVERYTHING popped into my head. I was happy, scared, confused, sad and  happy again. But the one thing I knew I wasn’t going to do was get an abortion. I experience it once a week before senior year started and it was something I wasn’t doing again. Back then I knew I wouldn’t be able to take care of a baby but having a baby at 24 I knew I had a better chance. I got my bachelors degree and I knew my baby was who I was going to be living for so me continuing to go forward in life wasn’t and isn’t going to stop. Like many women I hoped for my baby’s dad to be there but I also knew that wasn’t a guarantee so from the beginning in the back of my mind part of me was preparing to be a single mom. Of course I wasn’t going to admit that to my family because like many women you don’t want your relationship to be looked at as a fail but sometimes we have to accept that all things aren’t meant to be in order to move on.

I had my son on June 17,2014 and it’s been a blessing. God gave me the greatest gift. I’m not with his father and I haven’t been for months. At first I hated it and at times I still have my moments BUT I wouldn’t change a thing. We as women are strong, stronger than we like to believe and we were made for this.