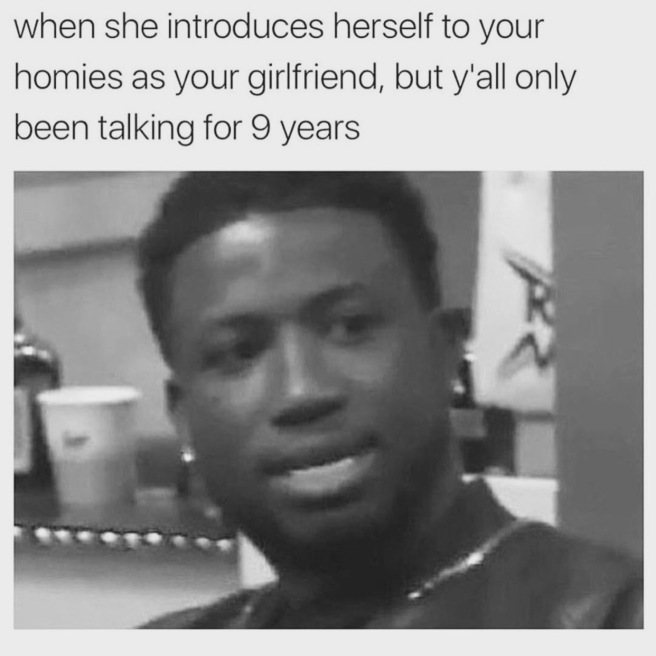 Please don’t let this be you ladies; wasting 9 years on a guy who can’t commit. Whole time you’ve been thinking you’re in a relationship when really it’s a situationship. Now the both of you are standing there with a dumb ass look on your face; confused as hell. He’s wondering why you think you’re his woman and you’re mad as fuck wondering why he thinks you’re not. Jokes on you girl. Should have seen the signs and cut him off a long time ago. So now this man has you stuck contemplating if you should let him go or ride it out because you’ve invested all your time into what turned out to be nothing. Better get smart and cut ties while you still have some life to live.

I’m not going to act like I’ve never been in a situationship. I’ve had my share; it seemed like we were a couple or heading down that path. You know, going on dates (those eventually turned to Netflix & chill), always talking and meeting family members. The thing that really fucks you up though is sex. Sex will trick you into thinking the situation is more than it actually is. Don’t get me wrong some guys will tell you upfront they only want to chill and have sex from time to time; they aren’t ready to be in a relationship. As women we have to respect that he is being honest with his intentions. If you can’t respect it there’s two routes you can take; move on or check your feelings at the door.

For those women dealing with men that sell us the dream we have to remember that actions speak volumes and words are simply that, just words. If he isn’t putting  effort into showing that what he says is true, it’s meaningless. Men plot and what they say at times is not coming from a good place. His words are being used for the sole purpose of stringing you along for as long as possible, hoping reality doesn’t slap you in the face telling you to wake up and leave his ass. Being a woman who knows what she wants out of life and a man, I’ve learned that I can only hold on for so long until I become labeled foolish.

Just last year I found myself in a situation I thought I’d never get out of because I thought, keyword thought, my heart was in it but really it was lust. For months on top of months on top of months this guy was trying his best to spend time with me. We would talk all the time and give each other advice on the trails and tribulations in our lives. It only felt right to give him a chance. First six months, absolutely great and then all hell broke loose. I should have left at the first sign that I was going to be trapped in a love triangle and then a square. I held on to his words instead of looking at his actions:

All these things happened to me while dealing with this guy and yet I kept going back. I’d go a month or so not speaking to him and he’d always find a way back in my head and my pants. He even stooped so low as to tell me he was in love with me. Who tells that kind of lie to keep someone around you have no intentions of being with.

If you love someone you do not treat them like a random female you met in the club on a Friday night. You’d respect her feelings and give her the position she deserves or you’d be a man and let her move on with life. Stop approaching her with your we’re meant to be, no girl compares to you and fake I love you lines. Stop blocking her blessings and ladies stop letting him block your blessings. It literally took me a full year to realize my worth and see that he didn’t appreciate me at all. I was just his comfort zone. He got comfortable knowing I’d let him back in. Ladies do not be his comfort zone. Do not let him keep you trapped in a box and feeling like you’ll never be able to find someone as great as him because he’s not great. You’re the prize and you deserve to live your life free and happy. So if no one (friends or family) has ever told you to stop wasting your time on a guy like this, I’m going to tell you… CUT HIM OFF RIGHT NOW and spread your wings.

If you’ve been keeping up with me,
Not everyone will see the big picture but don’t let it discourage you. Keep clapping for yourself no matter how big or small the success. 🤎😘
Keep smiling 😁
It’s really for the best. Takes some of that weight off your chest—the stress from your heart.
Have you had the chance to check out my self-published poetry book, “Her Final Entries”?
Loading Comments...
Comment
×
%d bloggers like this: